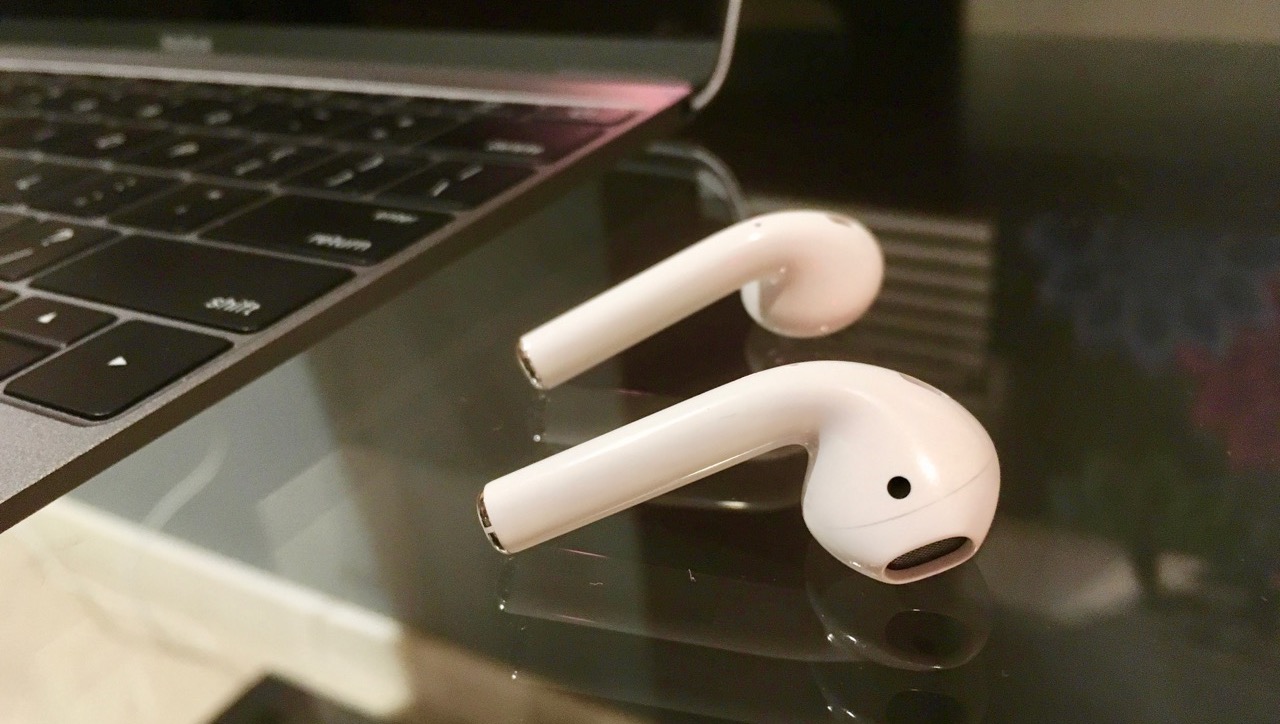 Apple's AirPods were one of the more exciting and controversial things announced back in September, and unfortunately, there was quite the delay in seeing them come to market. A few months later, AirPods are beginning to become available in limited quantities, and I was able to find a pair and see what the experience is like.

Apple has done a really excellent job with the packaging, as usual. Inside, the AirPods case awaits, waiting to be opened up. Setting up the AirPods with my iPhone SE was extremely easy: with Bluetooth enabled on my phone, I simply popped open the magnetic lid of the case, and my phone instantly brought up an AirPods pairing window. Pairing took 4-5 seconds for me, and then I was set.

I think the AirPods look really great, actually, and they certainly feel premium. Small touches like the polished aluminum at the base of each one make them feel nicer than standard wired EarPods. The charging case feels characteristically Apple, with beautifully carved openings for each AirPod that magnetically keep them in place, and a small charging light that indicates the current battery level.

In the ears, my AirPods felt secure. From what I've read online, it seems like the majority of users find that AirPods fit snugly. This isn't surprising, as Apple has surely shaped the AirPods to fit nicely in as many types of ears as possible. That being said, my left ear didn't hold onto its AirPod quite as well, and after thoroughly shaking my head, I got it to pop loose. Thankfully, I can't imagine this would ever happen without me first recognizing that it was on the verge of getting dislodged. I also found them to be a bit more comfortable than EarPods. Leaving them in my ears for hours felt fine.

AirPods sound good. Let's get that out of the way. I couldn't detect a significant improvement over standard EarPods, which also sound good, but they certainly sound at least as good. There's a surprisingly large soundstage created for open earbuds of this size, and I found myself more than satisied as I listened to some favorites in my library. However, I can't say that I'm all that impressed by the quality of the sound given the price. Paying over $150 should really give you something remarkably great, and these just sound Fine.

I haven't used non-noise isolating earbuds in several years, and I must admit that I'm still partial to that style. For listening in noisy areas -- study areas in college buildings, buses, and airplanes -- noise isolation (or cancelation) makes a significant difference. AirPods just don't deliver any level of noise isolation, and while some people prefer being able to hear the world around them, I would much prefer to block out the noise and better hear the frequency range of my music.

Overall, the sound is nothing to write home about. AirPods are all about the technology that comes with them.

AirPods are some of the first "truly wireless" earbuds to hit the market, and despite a general sentiment that they're expensive, this comparison on Reddit demonstrates that they're actually quite competitively priced in the space. A big part of that price is going towards the technology inside: Apple's W1 chip. Built on top of Bluetooth, this chip alleviates some of the pairing pains associated with Bluetooth devices, and I found that it works as advertised. It was super easy to pair the AirPods with both my iPhone and my MacBook, and switch between the two devices. This was one of the best use cases I found for the AirPods, making it easy for me to switch from listening to music on my phone to putting some music on at my desk.

The AirPods look a little bit elongated when you wear them in your ears. The length is important for two things: first, it helps them cram in enough battery to achieve a pretty satisfactory five hours of listening; and second, it lets the base of each unit function as a targeted microphone for Siri operation. Tapping twice on an AirPod will bring up the Siri voice dialog, and it works just like you would expect. It's neat, but it's also a bit limiting, because it's the only interface available. Asking Siri to raise or lower the volume is a lot less efficient than a button or a swiping gesture would have been. For the time being, I much prefer reaching into my pocket and using the volume buttons on my phone.

Is it particularly novel to have two wireless earbuds not connected by a wire? I'm not yet convinced. In terms of practicality gained, I suppose it's occasionally useful to just keep one in your ear, as a sort of throwback to the Bluetooth headset. It's also neat that they automatically switch to mono audio playback when only one is in ear. It's also kind of nice to not have a wire dangling around the back of your neck.

But a wire also help things quite a bit. It keeps each earpiece together at all times, making it exponentially harder to misplace them. It also can hide additional battery power, something that BeatsX will do. Lastly, and perhaps obviously, it just helps cut cost. There isn't as tight of a size and power budget when you have a wire, and you don't have to worry about particular engineering challenges, like ensuring that both earpieces receive audio and play it at exactly the same time.

Apple's first iteration of AirPods are remarkable in a lot of ways, and if you enjoy the profile and open nature of EarPods, you will absolutely find utility and convenience in their wireless counterpart. I'm just not yet convinced there's enough utility here. I'm bugged by dangling wires, but it just doesn't bug me all that much. And once you transition to wireless-but-connected headphones, I'm not sure that the bonus of having each piece be individually wireless is all that compelling right now. AirPods are a glimpse into some really, really excellent engineering that I think will help move the wireless audio market forward. In time, the price will come down somewhat, and these could turn into the ultimate convenient earbuds for casual use. But owning AirPods today means making some compromises on sound quality, and the truly wireless nature throws just as many compromises as it eliminates. In the short term, I am much more curious about how BeatsX turn out. With the W1 chip, noise isolation, and greater promise of battery life, they could become the best wireless Apple audio product. We'll have to wait until February to find out.

Disclosure: I was employed by Apple during a summer internship in 2016. Opinions expressed here are completely my own and do not in any way relate to the work I did for the company.