Today we finally got a peek at Nintendo's next console. Maybe unsurprisingly, many of the recent rumors proved to be correct, and as such, Nintendo Switch is a pretty radical new idea that's fun to talk about. Here's my initial take.

The Branding Is Great

Switch is a great name. It would have been neat if Nintendo stuck with NX, but Switch works just as well. It's a fresh name for a fresh console.

I think the logo is great, too, and Nintendo really forces it upon the audience in Switch's first trailer. I can see the animated logo and sound effect sticking around for a long time, a la the old animated Wii logo with bowing "i"s.

The Design Is Great

Taking the "detachable controller" idea as a given, I think that Nintendo has done a good job making the console look attractive. The matte black is a good choice. And while the Joy-Con Grip adapter looks kind of funky and absolutely like a dog, it has kind of this odd appeal about it, like the old N64 controller.

We aren't yet sure if the dock has any processing power inside, to ostensibly provide better graphical performance when plugged in, or if it's purely a dock with video out. See Power Concerns, Again below for more on this.

We also aren't yet sure if Switch has a touchscreen. I would bet that it does, because it's too natural (and frankly, too cheap) of an addition not to make to a portable screen nowadays. However, I'm curious to see how limited this touch functionality ends up being. Unlike the Wii U, Switch does not expect or require gamers to have a touchscreen at their fingertips to augment or supplement gameplay or interfaces. There also doesn't look to be any promise of dual-screen gaming. The docking station very clearly covers the display! It's the anti-Wii U in this way, physically signaling that it will proudly be a single-display ecosystem.

I'm also curious to see how the software interface of Switch ends up. The Wii U's interface ended up being way oversized and dumbed down because it had to be touch-accessible on the Gamepad. I was always so frustrated by this, because it made the Wii U on an HDTV not look much better than the standard definition Wii did.

If Switch offers purely optional touchscreen functionality, such as keyboard entry, I would hope that touch-centric visual assets do not poison the rest of the console's user interface.

Another concern is that Switch's screen, rumored to have a resolution of 1280x720, will also force the interface to look good at a relatively lower resolution, effectively causing the same problem. If this is the case, I dearly hope that Switch is able to look better, and use more screen real estate, when docked to a 1080p or 4K TV.

The standard Joy-Con controllers don't seem to deviate too much from a modern standard button layout, with the main difference being that there's no longer a directional pad on the left side. This change allows each individual Joy-Con to be used as a small, simple controller when held horizontally, enabling casual two-player games without the need of owning a second discrete controller. I think the convenience of this is brilliant. The ergonomics of these individual controllers (shameless plug, sorry) look to be severely lacking, but I think the ability to always bring a friend in for some casual multiplayer is a big win.

The Joy-Con Grip adapter looks odd, but I'm guessing (hoping?) that it'll be comfortable enough to not feel like a compromise. But thankfully Nintendo is also releasing a Pro controller, which I expect will be the de facto standard when purchasing a second, third, and fourth controller for the system, unless the individual Joy-Cons end up being stuffed with neat motion control tech or something like that. 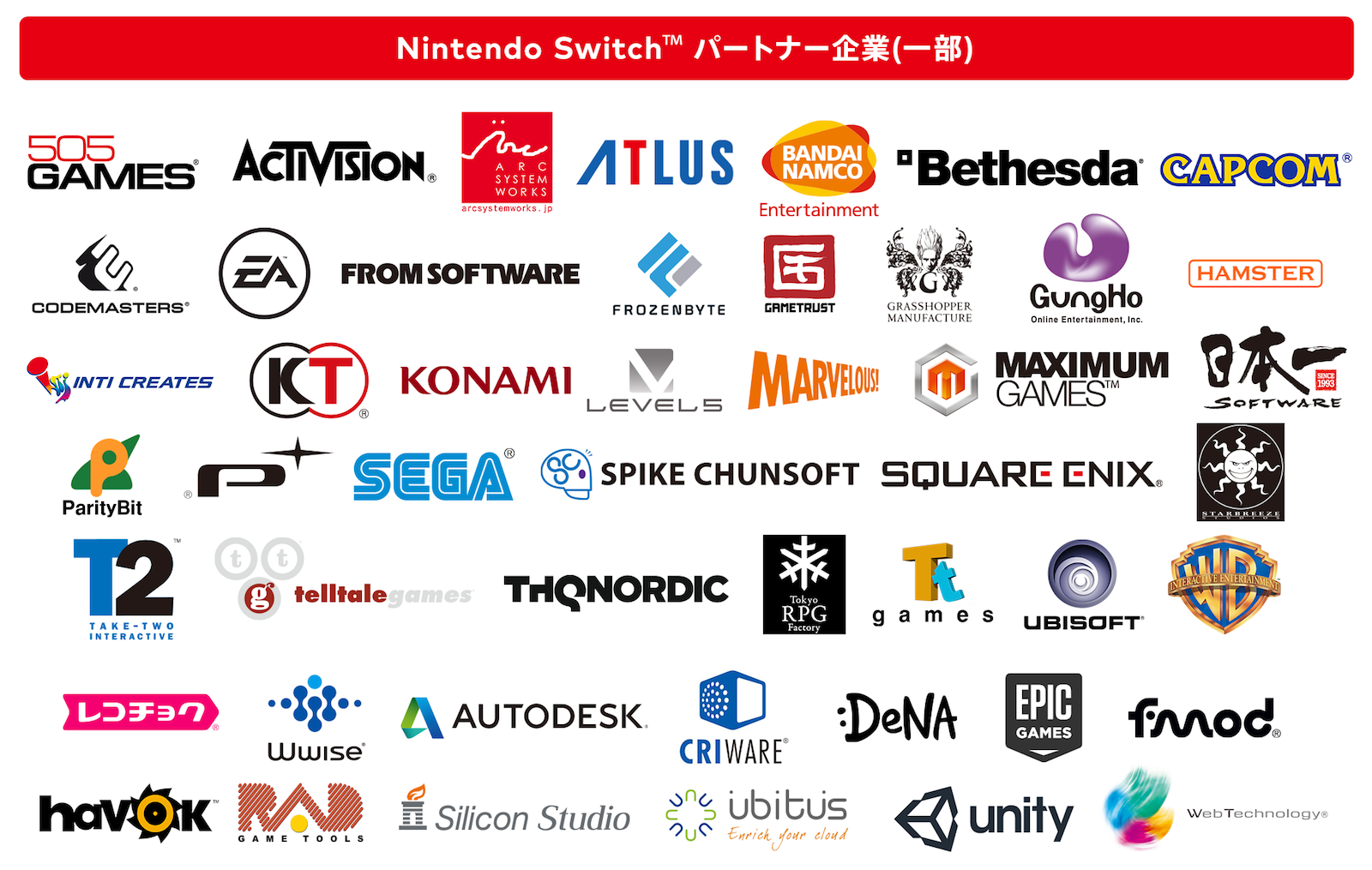 This is great! Bethesda, bringing what looks like remastered Skyrim to Switch, is a particularly big win, given that they haven't supported Nintendo at all in recent years. However, this all doesn't mean that much. The Wii U had similar adoration from EA, Ubisoft and others when it was first announced, and the console actually got a few editions of Assassin's Creed and a Mass Effect port before support dried up.

Ultimately, all of this pledged support means nothing if the console doesn't sell well. So, while this news is great, I don't know if I'm all that surprised. The real test will be seeing how many developers still have active games in development for Switch two years after it has been released.

In June 2012, Stephen Totilo of Kotaku wrote a prophetic article about the Wii U's concerning graphical chops. Revisiting the article today, it's clear that much of his concern ended up panning out. The gist of the concern is that, when Nintendo releases a new console, if it does not have graphical capabilities to compete with what Sony and Microsoft are offering, there will be less incentive for "hardcore" gamers to choose Nintendo's console over the other options, and as time goes on, developers will abandon Nintendo's weaker platform to push the graphical capabililities of the strongest consoles available.

After the GameCube failed to sell particularly well, even though it was more powerful than the PlayStation 2, Nintendo took a radical turn with the Wii, releasing a console that could not graphically compete with the PlayStation 3 and Xbox 360. The Wii experiment worked out beautifully, and the console went on to sell over one hundred million units. But the same could not be said about the Wii U.

I imagine Nintendo saw two possible paths forward for their next console. They could either try to match or surpass the specs of their competition, or they could push the "innovation" thing again. With Sony and Microsoft releasing spec-bumped consoles mid-generation, I'm guessing that Nintendo was hesitant to get in a spec race.

So, here we are with another Nintendo console that will probably be markedly less powerful than its direct competition, the PS4 (and Pro) and Xbox One (and its future Scorpio incarnation). At best, it will offer performance close to the current PS4 and Xbox One, only to be outpaced by their updated versions within its first year on the market.

I fear the same thing will happen with Switch, unless it sells extremely well, or unless it proves especially easy for developers to port their x86 games over to the ARM architecture of Switch's Nvidia Tegra chip. It's encouraging to see early support for modern game engines. Perhaps this will end up meaning more when it comes to getting multiplatform titles.

Who Is It For?

It's fitting that the reveal trailer shows no children. Rather, it's all about twentysomethings. Is this the console for the twentysomething who doesn't want to buy a PlayStation 4 or Xbox One? Maybe Nintendo is signaling that no, this isn't for kids, because kids are preoccupied with playing Minecraft on iOS and Android devices.

I still think kids will want Switch, but it's a considerable departure from the marketing for the Wii and Wii U, which was aimed at the young, the old, and families.

Maybe Switch will make casual local multiplayer gaming cool again, carving out a distinct market from the PS4 and Xbox One and reigniting some of the excitement that made the Wii sell so well. We'll have to wait and see.

I Will Still Pre-Order

I still get giddy when I hear about new Nintendo hardware, and I still love playing Nintendo first-party titles, so I will likely buy Switch at launch. I've gotten tons of use out of my Wii U, and if Switch is able to bring some of the Wii U's best games (Mario Kart 8, Splatoon, Super Smash Bros for Wii U) to a larger audience, I'll be happy to buy them again.

Nintendo's biggest challenge now is marketing this thing just the right way. The way I see it, Switch's biggest advantage is not any of its perceived gimmicks; rather, how the "gimmick" of a combined home/portable console removes compromise. For once, it seems like we're getting a console that isn't trying to change the way we're supposed to have fun, but rather one that's trying to make it easier for us to have fun. I'm optimistic.